Monday’s Twitter Urbanism Bone to Pick was about Lyft reinventing the bus line. If the Lyft “shuttle” wasn’t a public bus exactly, then — as suggested by Tarin Towers and Ed Parillon among others — it sounded a lot like a private jitney. A really exclusive kind of private jitney. As Jeremy B. Merrill wrote, “it’s a bus route that excludes people without a smartphone or plastic money.”

I’ve been bellyaching for a while about how jitney services might do harm in the wrong hands, especially if they’re not taken up as nonprofit or public services. Because if unscrupulous van route operators are just out for profit at all costs, they may find extortion pinch points in the expulsion of poor, disabled and aging people from conveniently walkable center cities to low-density, service-deprived places like Vallejo or Tracy.

The cheap housing is now where transit isn’t. The people being cast out by rich cities are often carless or unable to drive. Some with mobility impairments. Some getting by on narrow margins of safety, with low tolerances for paperwork and administrative fuss. To get to the supermarket, the doctor, the Social Security office, the senior lunch program — ex-urban expellees will have to travel long, inconvenient routes: timing trips according to bus schedules, changing routes by way of lonely bus benches, asking rides from family, neighbors and caregivers.

So if there’s a good paratransit service, great. If there’s a nonprofit public health shuttle, especially with light case management such as appointment reminders, that’s lovely. If there’s a nice person with a van who doesn’t charge too much, great. But if there’s a hard-souled greedhead running a fleet of vans, charging what the market will bear? It would be too easy for someone like that to cause too much harm.

Hence the worry about jitneys. Looking at results from this Twitter search link, I see I’ve been repetitive about it, going back to some thoughts on my old blog in October 2012.

So, I won’t repeat myself further here except to say, this is an issue to watch.

I put together a quick Storify from today’s good Twitter conversation about anti-sitting spikes in public spaces and other attempts to move non-paying customers along in public space.

My news feature about illicit encampments and efforts to clean up watercourses in San Jose has been getting some kind attention. The main article is on the CP&DR page and there’s an introductory summary at Planetizen.

I have a guest post on Failed Architecture about the uproariously tin-eared marketing campaign for San Francisco’s NEMA apartment complex.

Here it is. Editors Mark Minkjan and René Boer did a lovely job. Especially René’s choice of the opening image. Very Sirens of Titan.

In case you’re wondering, the people crossing the street outside in Santa and Christmas-tree costumes were part of last week’s Santacon pub crawl.

Twice I’ve had the thrill of crossing the Spanish-French border under European Union law. Once at Hendaye, once at Portbou. There are no border guards now. No papers to show. You just go on through. If you’ve read and heard about the history of border crossings there, it’s like undercounting stair steps in the dark: you reach out a toe, feeling for that one more step down, and instead you find bizarrely solid ground.

Without meaning to suggest equivalence, I had a distant echo of that feeling today at the gate shown here. It was, until recently, the gate to San Francisco’s main city car impound yard. For the last ten years it was run by the Auto Return company. Before then it was run by the legendary City Tow. END_OF_DOCUMENT_TOKEN_TO_BE_REPLACED

I’d been meaning to post a photo of the picket-fence minipark at Butter. It’s a classic of nostalgic apples-and-oranges irony, subjecting the nightclub block of post-industrial 11th Street to a rural/suburban standard of quaint. The point of the fence is heightened, not weakened, by its resemblance to a stage set when viewed from the side. It’s there to say, only half as a joke, “Well, we’re trying to live up to the American ideal here, but just look at the poor materials available to us.” It fits Butter’s only-half-joking offer of nostalgia cuisine: microwaved, fatty American suburban standards “just like your babysitter used to make.” 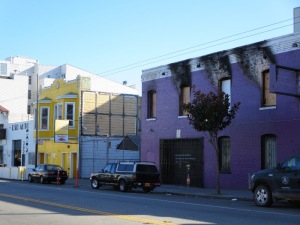 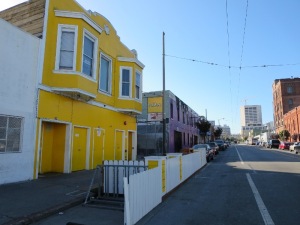 This past weekend a fire damaged the warehouse building two doors away, heightening the visible contrast between rural/suburban ideals and the ugly side of urban life. Neighborhood organizer Jim Meko reported tartly on his site that the damaged building has its own history in the 15-year-plus running dispute over the future of 11th Street. That debate has mainly concerned whether the street shall remain exclusively for entertainment and business uses or whether residential development can coexist with either. As Jim notes, given current economic pressures the fire is likely to hasten the upward economic climb of 11th Street no matter how the damaged property is rebuilt. Tech is already very much on that block. Heroku, for example, has offices in the big brick Jackson Brewery building on the corner.

Suburban residential expectations made their first appearance South of Market with the Web 1.0 tech influx and loft boom. Condo conversions changed the neighborhood radically during that time, peaking between 1998 and the Nasdaq plunge of 2000. Noise and other factors perceived as nuisances were the initial wedge issues between older and newer uses South of Market.

Fundamentally, these disputes had to do with whether South of Market, then being renamed “SoMa”, was inside or outside the respectable city.

It had been presumed for years that South of Market took in the businesses and people rejected from more manicured city neighborhoods: loud or rude entertainment sites; immigrants and others who faced discrimination elsewhere; poverty services; loud or noxious factories; meat packers with their smells; auto body shops with their paint fumes; bus yards and delivery garages; latterly, artists’ and artisans’ studios.

Harsh policing driven by social rejection had pushed the gay bathhouses and related gay leather culture to South of Market. After the bathhouses were closed, their places were often taken by other institutions viewed as being difficult neighbors. As this report of a local history tour explains, the former Club Baths at 8th and Howard became the Episcopal Sanctuary shelter and the Sutro Baths became the 1015 Folsom club.

That all changed — or rather, began to change — with the late-1990s loft boom. Condo buyers began to arrive from suburban upbringings, bringing with them suburban standards regarding noise and nuisance. Existing business owners and rent-controlled tenants feared new residential uses, not from fear of new housing per se, but from fear of monied, politically able newbies enforcing rights to quiet enjoyment of their premises — rights that, legally speaking, they did often possess.

Considering the history of noise South of Market, many past residents would have found it laughable to suggest that clubs harboring loud music and noisy drunks should preclude people from making their homes on the same block. Our own apartment, quiet now, is near a condo-converted warehouse that used to be a furniture factory. The landlord who originally rented to us had lived in our unit when part of its price was tolerance for bandsaw noise amplified by concrete walls.

Suburban ideas of neighborly duty have moved into South of Market to stay — at least, compared with late-1990s conditions, I’d say they have. I benefit from them personally. I can work at home undisturbed day or night, except when the yuppies in the converted furniture factory get to partying. But I continue to wonder if these currently applied noise and nuisance standards are any more suited to our dense downtown area than Butter’s comical picket fence.

A thing people forget in their nostalgia: that picket fence had Tom Sawyer’s Aunt Polly standing behind it, shouting at him. Tom (or anyway, his author) ran away to San Francisco to escape her.

Just saw Paul Mullins’ post, “Cannibalizing Suburbia: ‘Storage Wars’ and the Ruins of Affluence“, on his Archaeology and Material Culture blog. His post lives up to its wonderful title, and you should go over to his site and read it.

A followup comes to mind based on reading and thinking about ways to live other than in houses. It’s about what Mullins calls “the failures of idealized middle-class materiality”. More specifically, our unstoreable, unaffordable mountains of suburban stuff are fallout from the collapse of an unsustainable myth: what top HUD political appointees used to call “the American dream of homeownership.”

Americans had bought the fiction that a single-family detached house was the only truly mature or respectable way to live.  That fiction was as destructive and unrealistic as an eating disorder. People gave up their savings, their credit, and in some ways their freedom to choose jobs, home towns or leisure activities, all for the American Dream of Homeownership. Looking back, it’s as tragic as the mentality of a teenage girl who, instead of following her own path to adulthood, decides she isn’t normal or even fully real if she doesn’t look, act and live like her models on television.

We’re not all thin, we’re not all beautiful, we don’t all live in New York or Beverly Hills, beauty isn’t the same for everyone, we don’t even all want to live in “little boxes on the hillside“, and a home isn’t always a house.

This morning’s San Francisco Chronicle has discovered vehicular residency as a cute alternative to conventional housing in San Francisco. That is, our paper of record has discovered that some tech entrepreneurs live in RVs. So, although this mode of housing remains formally as illicit as ever, suddenly it must be OK.

The story was trending on Hacker News today as though it were a brand-new stroke of brilliance. One fanboy gushed, “That’s what I like about the mind of an entrepreneur- the ability & desire to innovate.”

Time was, we could count on the law in its majestic equality to forbid the rich as well as the poor to sleep under bridges — whether under blankets, under cardboard and pallets, in tents, or in RVs.

Now it seems that if you Learn To Code and live in an RV, you can have a free pass from absurd laws. In fact, you’ll get cred points for your creative cheekiness — as though nobody had thought of cutting the same corners before you did. END_OF_DOCUMENT_TOKEN_TO_BE_REPLACED