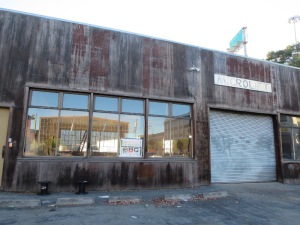 Odd to notice my own sense of relief at seeing a contractor’s sign in the window of the Dwan Elevator building.

This is the single-story paneled utility building that has hunkered mysteriously for years opposite the Concourse Exhibition Center at Eighth and Brannan. A boat sat on the warehouse floor inside these windows for a long time. An RV sat on the pavement outside. Nobody seemed to be using either. 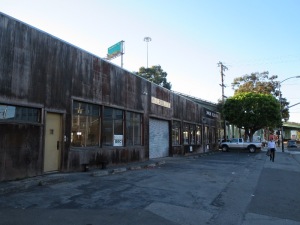 Around the Dwan building, over the years, condos were built. An REI store moved in. Major offices of Adobe and Zynga and Pinterest moved in. The Concourse Center started booking fancier gigs. And the Dwan Elevator building just sat there. Much of it providing dead garage space at what must have been among the highest opportunity costs of any real property in the city.

So the odd part is, I’ve caught myself feeling there was some kind of moral failing in the stasis of this property. As though the owner had a duty to let the property be developed. Not necessarily because it ought to house people, as in the case of the long-vacant Hugo Hotel on Sixth Street — though of course, any property could conceivably house people. No, just because it seemed to be going to waste.

I don’t know where that impulse comes from exactly — the feeling that there’s a moral call to turn a property toward what city planners used to call its Highest And Best Use. Whether it’s granting deference to The Market as arbiter of value, or on the contrary feeling a collectivist impulse that says in some sense all resources are shared. Or whether it’s part of the generic human urge against entropy. The urge to see a thing or person be of use whether profitably or not.

Whoever owned or owns the Dwan building has, and had, a legal right to leave it unused. Also, I suppose, a moral one. I certainly wouldn’t want Highest and Best Use thinking applied to my own home, which is in a South of Market apartment building that some people might not view as being dense enough.

So why the sense of relief at seeing that the Dwan property will now wake up and become something else?