The sun went blood red over Interstate 5 yesterday. The unnerving red of it doesn’t come out in the photos below but I hope they convey some of the surreal imposition of twilight by smoke in an otherwise blue sky.

These pictures are from yesterday evening along I-5 in

California’s northern Central Valley. They show smoke from what, from the map, must have been the Clover Fire. This fire has burned 6,700 acres — more then ten square miles — in farm country southwest of Redding, California. Places with bumptious pioneer names that are tragic to read in the local papers’ fire news: Happy Valley; Clear Creek.

Between 6 and 7 p.m., with sunset not due until 7:28 p.m., the sun looked hard bright red most of the way from Redding to Willows. Different reds: like a drop of blood from a papercut, like cherry soda, like a stop sign.

All around it was a layer of smoke. 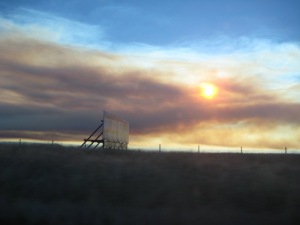 Smoke filling the lower half of the sky while all above it was blue. We could see the shadow of the smoke stretching several more miles out to the east of the highway. It had a reddish tint all along the far edge. 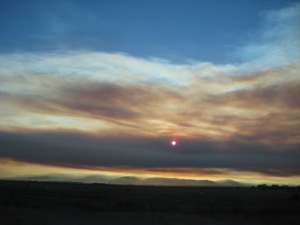 At places where the thickest smoke crossed the sun, our view to the west from the highway looked like a pretty good facsimile of Hell.

OK, this concludes my attempt to write like Jimmy Breslin. Don’t worry, I won’t make a habit of it. What made me write this way is, it was shocking.

o say, sometimes you get walloped upside the head with the fact of climate change. Hard enough that you have to think about it.