Joel and I spent a giddy half-hour last May being conjectural planners in the South of Market Trader Joe’s parking garage. Nobody accepted us as planners. We didn’t have the power or intention to build or change anything. We just announced our plans to each other to find out how it felt to do that.

Joel was channeling that long-armed, hard-hatted Capitalist Realist in the Swinerton Builders logo we see all over town. “We’ll put this over there!” (Grand dramatic gesture!) “We’ll put five of those over there — we’ll need to get the cast iron ones — and we’ll bring in the crane through here!” (Points!) “When in doubt, gesture proprietarily.” (Pointing grandly but randomly at some dang thing!) “*That*’ll have to go.” 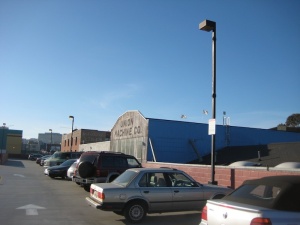 It was, if you like, an experiment in “tactical urbanism“. Our experimental conclusion is, the fun’s in the testosterone rush of announcing one’s personal unilateral intentions for other people’s space.

Morally, seriously, I don’t approve. Apart from private property rights, the members of a neighborhood have legal and moral rights to handle any proposal for change through a democratic process where many voices are heard. Just because an idea seems tasty doesn’t mean it will be popular or useful. It’s colonially offensive to walk around exercising the privilege of Adam as though a place were an unmarked empty Eden, naming things and announcing their purposes without consulting anyone else.

In our thought-experiment, our unilateral choice was to create a rooftop cafe/park on the open-air second level of the Ninth and Bryant parking garage. It’s just pavement up there now but it’s mostly in sunshine, whereas the existing cafe areas on the property are downstairs in the murkier air of the ground-floor garage area.

A rooftop cafe in the parking lot wouldn’t necessarily be anyone else’s choice. There are probably sensible reasons, reasons worth hearing, why it’s a bad or foolish idea. For example, the view isn’t the best, the air quality isn’t the best, the parking garage is a popular one where people take all the spaces they can get on both levels, and there’s a cafe already downstairs that has running water and permits and such. But, well, on this day we were pretending to be planners.

Maybe you’ve seen the Ninth and Bryant garage/mall shared by the Trader Joe’s and the Bed, Bath and Beyond and several other shops. It was designed in the days when people viewed South of Market as a forbidding neighborhood. Following the logic of defense against undesirable locals, it adheres to the dumb-wall school of selective welcoming. If you don’t have a reason to go there, and if you don’t in some sense belong there, you’re not likely to wander in by default. You’d think a garage would be ancillary to the shops it serves. But at this hunkered-down little mall, the garage is the centerpiece and is the most visible use until you are actually inside one of the shops.

To get to Trader Joe’s as pedestrian neighbors, which we do several times in a typical week, we have to either walk in alongside the cars on one of two slightly unsafe driveway entrances, or find and enter the sole pedestrian entrance, which is a narrow, minimally signed gap awkwardly located along the Ninth Street wall of the property.

The architectural message is clear: if you are a normal customer you will get here by car.

So, seriously, I don’t like the design of that Ninth and Bryant building, and I think the Trader Joe’s and Bed/Bath stores should be opened up with street-facing entrances and, yes, maybe there should be a rooftop cafe on the upper garage level.

But don’t just listen to me. I don’t live on that block, I’m only a long-term customer. If that corner is to be changed, then the owners and the neighbors and car-driving customers and other pedestrian customers ought to get together and figure out what’s going to work.

By the way, this post is captioned “#Lunchinginpublic” because, when we went up to that upper garage level and declaimed our plans for it, we were meaning to return for an installment of our irregular “Lunching in Public” feature. (Also here.)  When we Lunch in Public we select a public space, we purchase a picnic lunch as nearby as pleasantly possible, and then we eat lunch in the space and report on the experience. I haven’t written this up sooner because we did mean to come back and buy a Trader Joe’s ready-to-eat lunch downstairs with maybe some coffees from the Peet’s down there, and sit in an upper-level parking space and consume away. But we haven’t gotten around to doing that, and it wouldn’t be as much fun as the announcing-plans stage, and anyway Trader Joe’s might have objected. So I guess I’ll consider the experience complete.

A note about sponsored posts

Because I haven't purchased the "Business" subscription rate, Wordpress inserts advertising text in my weblog, lately including "sponsored posts" that could appear at first glance to be my work. I have no control over these sponsored posts and did not create them. -- MB